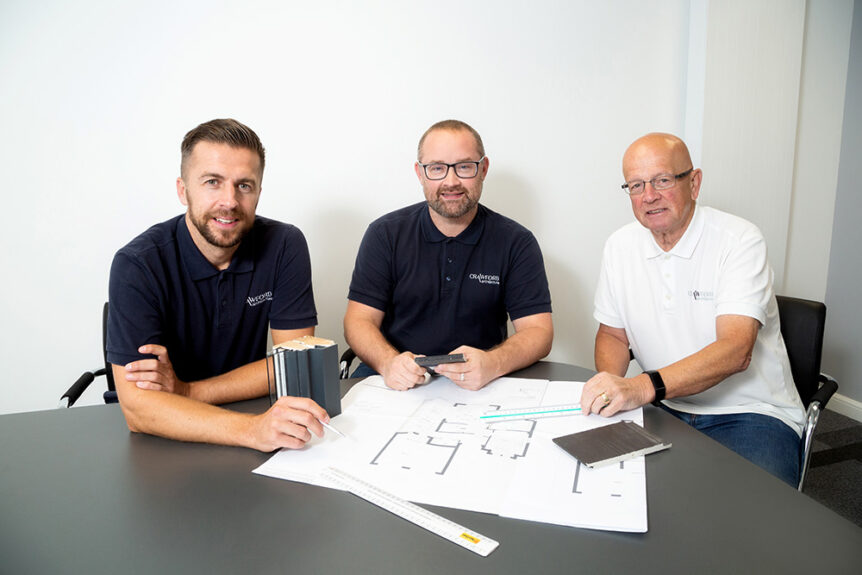 We are delighted to announce that long-serving member of the Crawford Architecture team David Paton has been promoted to the post of associate director, as we continue to plan for the future growth and diversification of the business.

David has been with the family firm for more than 15 years, and started his career studying at university alongside fellow director, Kevin Crawford.

A life-long Montrose resident, David is a well known face in the town having been chair of the Montrose Music Festival for eight years. He then founded the town’s Playhouse project, turning the former swimming pool into a state of the art cinema, which is due to open in the Autumn and he is acting currently as its chairman.

Speaking of the promotion, Kevin, son of company founder John Crawford, said: “David has been a valued and integral part of our business for many years and feels like a part of our family, so it was only natural that this would be the next step for him. It can be difficult to hand over control of a family business, however we know that David is the right person to help us move the business forward – especially with my father starting to slowly step back from day to day running of the company.

“David has been involved with most of our major projects and his interests outside of work also mean he has already acquired a vast amount of experience in leading teams and projects, so I have no doubt that he will rise to this new challenge and help us lead the business in exciting new ways.”

Recent major clients for Crawford Architecture include Fotheringham Homes, GlaxoSmithKline, The OGV Taproom in Aberdeen, and the Montrose Playhouse. In addition, the company recently expanded its Montrose premises to facilitate future growth.

David said: “I am extremely grateful to Kevin and his dad John for trusting me with this leadership position within their business. Over the past 15 years, our industry has changed so much, from drawing by hand, to utilising CAD software, as well as building and planning regulations progressing with an increased emphasis on sustainability.

“As well as my new role, I am also working towards my Part 3 examinations, which is the final stage of education for an architect and will allow me to become a chartered architect, which brings with it a host of benefits for the company and will also streamline processes for our clients.”

As well as extending its premises, Crawford Architecture has also invested in new software which it can use to enhance its ability to create animations and virtual reality walkthroughs, allowing clients to visualise the end result before a brick has even been laid.

Crawford Architecture work not only within the local area, but have taken on projects in Edinburgh, Shetland, London and Mauritus, with geography being less of an obstacle due to advances in technology.