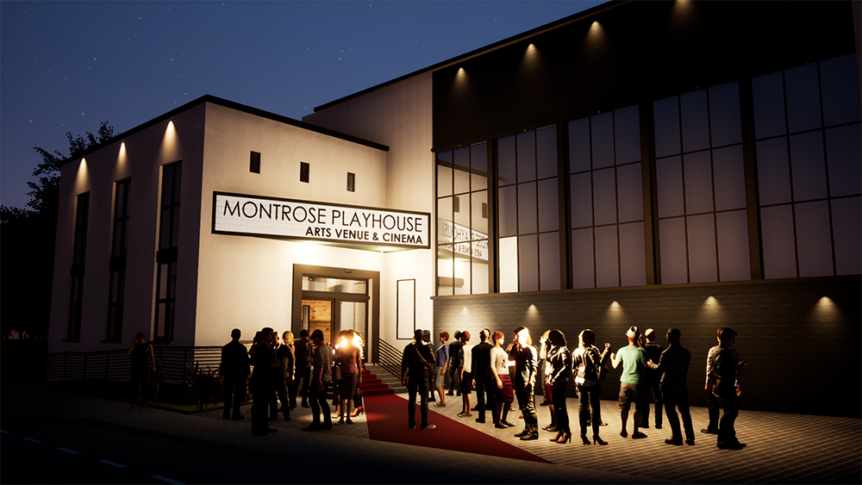 The work of Crawford Architecture varies widely on a day to day basis – from domestic extensions to custom built homes, house builders to large oil and gas projects, we’ve seen several unique projects over the years. But we have never seen a disused swimming pool transformed into a cinema!

The Montrose Playhouse Project was the brainchild of our very own Associate Director, David Paton, and it’s been our privilege to follow the journey of the project from his initial ideas in 2013 through to its public opening in October 2021.

David explained, “I’ve always been a huge fan of film and the arts and would often sketch out plans for a cinema in old, disused buildings in Montrose. When the old swimming pool became surplus to requirements due to a new facility being created in 2012 I went to work re-imagining the building and posted my designs online.

Within a few hours around 500 people had ‘liked’ the post and there were calls to try and make this design a reality. A week later the Montrose Playhouse Project was born and the rest is history.

The committee have worked tirelessly over the last nine years to bring this project to life and we just can’t wait to see what the public reaction to it is. All through this long journey the benefits to Montrose and the surrounding area have been at the forefront of our thoughts and we’re just delighted that there will be such an excellent resource at the heart of the community.”

The former swimming pool had been the town’s only swimming pool since the 1950s until its replacement facility opened in 2012. Some fixtures have been kept, such as the signage and starting blocks, and given a new lease of life in acknowledgement of the building’s past.

As a Montrose based family firm, Crawford Architecture are heavily invested in our community and it’s great to see such a prominent part of the town’s architectural landscape regenerated – not only to provide a world-class cinema, but also a variety of additional spaces for the community to use and for the building to once again become a thriving hub of activity in Montrose.

Director Kevin Crawford commented, “David has been a valued and integral part of our business for many years, and we want to take this opportunity to congratulate him, and everyone involved in the project, on their achievements in getting to this point. We’ve seen first hand that it hasn’t all been plain sailing for them, but we’re sure that seeing such positive reactions from the local and wider public makes all of the hard work worth it.”

We would encourage you to go and visit Montrose Playhouse – we think you’ll be amazed by it’s transformation and we’re sure the memories will come flooding back if you ever visited the building in it’s previous life!